Rainout. It's a dirty word in my book. Postponements are loathsome. You see, fans go out to the ballpark expecting baseball, and what they get is....wet. Soggy, flooding downpours that make it difficult to see ten feet in front of you. Cold, sodden jeans that refuse to dry out. It's a misery. In this Spring-that-never-was, we Tiger faithful have endured more than our fair share of rainouts. Very disturbing.
Another thing I find unsettling is this Brandon Inge/Don Kelly situation. I won't call it a platoon as yet, because it's only happened a couple times. Binge is scuffling at the plate (as per usual--will you idiots who claim he will do better this season year after forsaken year please stifle yourselves and accept him as Mendoza???) Our alternative to Binge??? Don Kelly. I call him Donkey. It's not a compliment. Who can accept either of these two stiffs in the lineup? There is no lesser evil here. It's fail on the one hand, and incompetence on the other.
I'm not gonna name names and subject anyone to jeers and catcalls here (though public humiliation should be the penance for expressing that affront to sane people everywhere), but someone told me he/she felt sorry for Inge today. What in the name of balls and strikes?? I just....No. There's no pitying someone who is batting .208 with one home run, 36 whiffs and 12 RBI. This guy deserves to stockpile gigantic splinters in his derierre.
I would love to speak about other Tigerly things, but my basement looks like Lake Havasu, and I've got to board a plane to Atlantic City to appear in a Jersey Shore episode. So enjoy your holiday weekend, and may the Tigers put some holes in the Sox.
Posted by OldEnglishD at 11:55 PM No comments:

Wow. I went to the park yesterday for my Mother's Day present. I thought we might be in for a bit of a disappointment after Justin Verlander followed up his no-hitter with eight innings of two-hit ball.
Not so fast, Miss Debbie Downer. Let us not denigrate Mr. Brad Penny. All he did was go eight strong, allowing five measly hits and ZERO runs. Penny did get multiple assists in the form of dazzling defensive plays. It was fun. Winning is fun. Shutouts are fun. Watching Papa Grande celebrate the final out was more than fun, it was grande. Everything he does is grande.
I had a lot of stars in my scorecard yesterday. Stars denote a particularly nice play. Brandon Inge went a few rows into the stands to snare a pop foul off the bat of Brayan Pena. In the fourth, Casper Wells saved a run after Billy Butler doubled. He made a nice sliding catch off a Francoer flare that threatened to shoot the gap. Then on the very next play, Austin Jackson ran down a deep Eric Hosmer shot to straightaway center. In the seventh, Scott Sizemore made a diving stop on a Billy Butler grounder that was "sure" to get through the infield. These flashes of leather made me smile. I'll bet Brad Penny smiled himself to sleep last night.
Jhonny Peralta got his 1000th hit in the sixth inning on a double over Alex Gordon's head in left-center. He got a nice ovation, but didn't seem to want any fanfare over the moment. He calmly called for time to remove his shin guard instead of tipping his cap to the crowd.
Today's game has been postponed due to the relentless rain. Boo. What is a person to do with her afternoon when it's raining outside and there's no baseball on? Guess I'll knit a throw blanket in the shape of the Old English D. Sigh.
Posted by OldEnglishD at 2:23 PM 3 comments:

Rod and Mario, I have a bone to pick with you. Early on in Monday's game, the two of you were discussing how Toronto is being careful with young Brandon Morrow's arm, and you then went on to say that it's the same way the Tigers are careful with Justin Verlander's arm.
Luckily I didn't have a mouth full of, well, anything, because it all would have come spewing out after hearing a "star-spangled, triple decked, gold-plated lie" like that one. (And if you know where that quote is from without looking it up, I'd love to hear from you.)
I am sorry, but we all know that Verlander's arm is abused until it's about to fall off almost every game. He threw 127 pitches in six innings just last week for sobbing out loud. We should just be thanking Ty Cobb's lucky spikes that Verlander has durability as the main component in his body composition. He hasn't been on the DL in the bigs. He hasn't missed a start since his rookie season.
Let us be honest with ourselves ok? The Tigers were careful with Porcello's arm his rookie season. In his last outing (the one before yesterday's hail-delayed affair), he threw 120 pitches over seven innings. Not exactly kid gloves for Kid Rick. I don't mind a little homer in my announcers, but I want the truth, not this steaming pile of guano. I will say this, it didn't sound like they really even knew they were feeding us a line of nitrite-ridden meat by-product. Rod and Mario aren't calculating enough to cook up a lie like that and sell it like it's a tasty treat. I think they believed what they were saying! Who's been washing their brains?
I can't believe they didn't burst out into uproarious guffaws after hearing the words come out of their own mouths. "Just kidding folks, we know that our club famously abuses young arms. Just having a little fun with you there."
To be fair, Rod Allen did school me later in that game or in one of the games from the last couple days. During a Miguel Cabrera at-bat, the Puma fouled off a pitch. No big deal, routine stuff right? Not so fast, says Rod. He explained that he could tell that Miggy was looking for a specific pitch, got something totally different, and still put wood on it. He was quite impressed that his swing didn't look completely awkward and he broke the whole thing down in x-mo. Quite educational, and it's not something I would have picked up on.
Just don't let the organization put the Vulcan mind meld on you, 'k fellas? I mean, next time you might find yourselves telling us how Little Caesars pizza is the epitome of epicurean delight, coming to us straight from Tuscany.

Justin Verlander.
Posted by OldEnglishD at 8:23 PM No comments:

So, my friend Nicole sponsored a trip to the CoPa yesterday (thank you!), and a few strange adventures occurred. First of all, it was such a beautiful day. The sun was out, there was not a cloud in the sky, and I even needed to apply SUNSCREEN. You must recognize that this beautiful day was an aberration of eric proportions for this Spring-that-never-was. It was glorious. 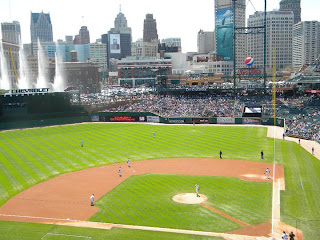 Get a load of this. The first game that Nicole and I attended this year was on April 12. At this game, Josh Hamilton broke his shoulder sliding into home on that notorious play. This time, Eric Chavez broke his foot sliding into third. Coincidence? I think not! We obviously have the mysterious power to fracture bones of the opposition with our very presence at the park. We were thinking that we should be sure to attend a White Sox game next.
It was Paws' 16th birthday celebration (sigh). I'm not gonna lie to you. Mascots creep me out. I spent the day trying to avoid the myriad mascot representatives that were brought in for the festivities. We had a close call by the escalators, but I managed to escape without being accosted. Muddy and Muddona were there from the Hens, the Pirates' Parrot, Sparty, and some really scary looking clown were there among some mercenaries like the Bell Tire tire and the Comcast remote (come on). Paws got a new car driven out by his father! See photo evidence below. All photos in this post are courtesy of Nicole Maitland and may not be reused without expressed written permission. 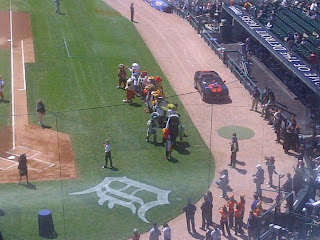 Nicole is a big Will Rhymes fan. She was none too pleased with Flea getting pushed out of the big club by Mr. Sizemore. She has begun a grass-roots campaign with the slogan "Bring Back Will." She vows to send this cryptic message to Jim Leyland himself every day until Rhymes regains his footing in the bigs. Needless to say, her slogan got a lot of play yesterday, since Sizemore whiffed three times. 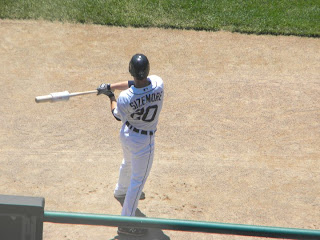 I have found the one person in the world who does not like Curtis Granderson. Nicole insisted on calling him Traitor throughout the game, despite my protests that he didn't ask to be traded. She wished a lousy performance on poor little CJ, with mixed results. Curtis was one for three, with a single, walk and a strikeout. I felt bad for Grandy. He didn't really deserve to be bad-mouthed like that. 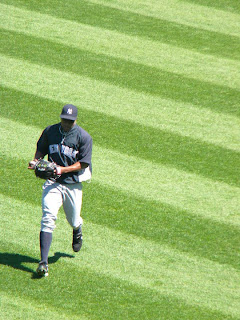 Boesch had himself quite a day at the plate, single, home run, three RBI. He also reached base on one of the THREE Yankee errors. Funny stuff. I take anything the other team gives me. Sloppy play? Yes, I take it. If you want to turn the game into bush league stuff, I am happy to oblige.
Burnett had a no-hitter going into the sixth, but we promptly jinxed it up by mentioning it loudly and repeatedly, and generally acting like idiots. It worked, so don't question our methods. Thank you. We did fool a guy sitting next to us. He looked over and asked if we were Yankee fans. We laughed and said no. He later realized we were serious fans and discussed some baseball matters with us. He and his girlfriend left early to "beat traffic." Might want to just catch it on FSN next time, my friends. Why bother hauling it all the way to park to bail before the game is over? I'm sorry. That's stupid. 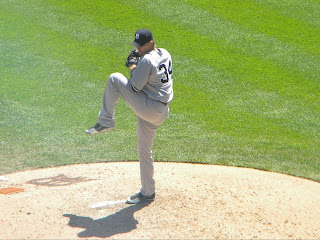 Kid Rick was not at his best, but managed to eke a quality start out of it, and Jim Leyland ran him out there for the seventh after he had already thrown 106 pitches! I was agape, and terrified. It worked out fine, however, and my fears were unwarranted...I guess. The outing ended up with Porcello throwing a career high 120 pitches. /shudders 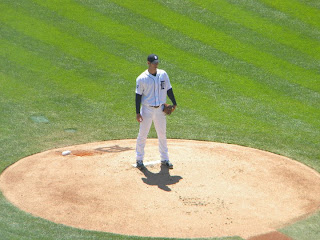 Finally, some guy dove into the Yankee dugout during the game and was promptly jumped on and pinned down until a phalanx of security arrived to escort the guy to Tigers jail. I've already written once about how Joe Girardi is an emotionless automaton, but Nicole checked ESPN's account of the incident during the game and it said that Girardi did not appear to have much of a reaction. Big surprise. The guy's a droid, I am convinced.
Posted by OldEnglishD at 7:40 PM 1 comment: